We headed north from Wellington earlier this week, setting out to explore the “Volcanic Loop” of the central North Island.  We spent a day visiting Lake Taupo, NZ’s biggest lake (known locally as the “Great Lake”) that was formed from the world’s largest recorded volcanic eruption over 70,000 years ago.  The lake and the surrounding town are now a favorite spot for both NZ locals and tourists, bustling with activity.  We enjoyed another beautiful day and headed out to explore the town.

But lest we get too relaxed (something Lee hasn’t really been complaining about), we also managed to get in another trail ride – this one to Huka Falls, a beautiful turquoise-blue  set of rapids and falls on the Waikato River as it narrows that from a width of ~100m to a 15m canyon. 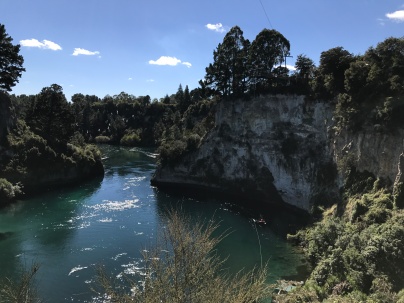 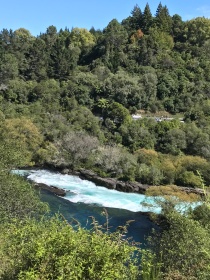 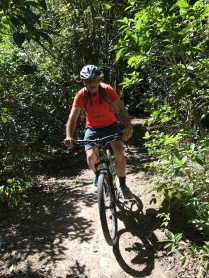 From there we headed just south to Tongariro National Park, NZ’s first national park, that covers an area of dramatic landscapes and encompasses three volcanic peaks – Mt Tongariro, Mt Ngauruhoe (otherwise known to Lord of the Rings fans as Mordor’s “Mt Doom” in the movie), and Mt Ruapehu, an active volcano that had a series of dramatic eruptions as recently as 1995 and 1996.  The area holds the relatively uncommon status of having dual recognition as a World Heritage Site, cited for both its physical and cultural significance and revered as sacred land by the Maori.

The park is best known for the “Tongariro Crossing”, a 19K track that is one of NZs most popular day hikes and another of the nine “Great Walks”.  Being a little nervous about the time required by our middle-aged knees, we stayed overnight just outside the park and got up early for the first shuttle of the day (5:30AM) to catch a brisk 6AM start – in the dark! (thank goodness Lee remembered the flashlight).  Between the dark, the volcanic landscape, and a bit of a foggy mist, the effect for the first hour or two of walking was distinctly other-worldly. 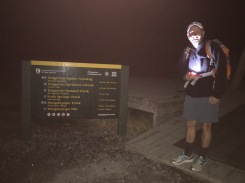 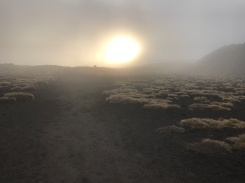 Once we had the benefit of the sun’s return, the daylight revealed a dramatic volcanic landscape, including the Red Crater, probably the most striking scene with its dramatic deep red color (not fully caught in my photos). 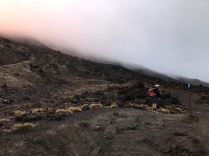 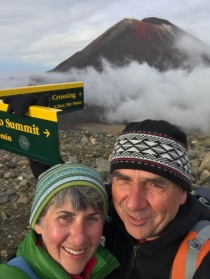 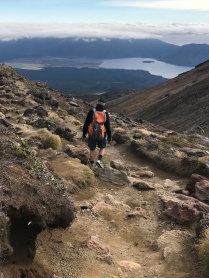 …the view from height of the climb included the striking Emerald Pools and Blue Lake, both acidic lakes with high sulfur and chemical content that are definitely better for viewing than swimming, as well as the peak of Mt Ngauruhoe. 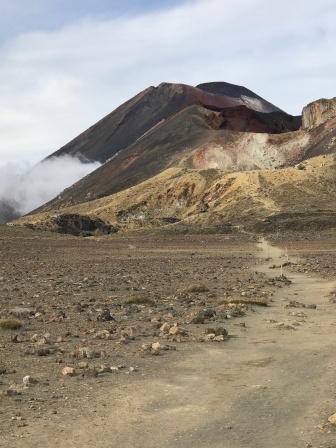 The active fumaroles (steam vents) and frequent smell of sulfur were good reminders of the volcanic activity that continues to rumble just beneath the surface of the dramatic landscape. 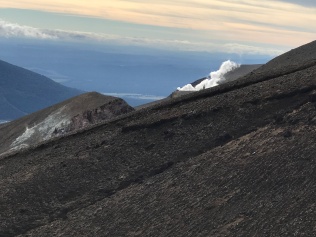 Luckily our knees held out and the second half of the walk was an easy downhill walk past a few more spots for more dramatic scenery, allowing us to finish by early afternoon.

The next day we took advantage of the return of more clear skies to get another view of the dramatic scenery by taking a drive up past the national park and into the Ruapehu ski area, NZs largest ski area, and took a ride up the ski lift.  While the rocks are typically covered in meters of snow by mid-June, the lunar landscape here was quite a contrast to the ski areas of the east – I’m sure the winter skiing is dramatic, but can’t quite picture spring skiing here! 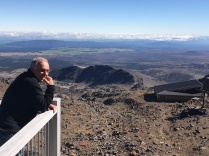