This was our last day of biking, getting an early start from Trinidad and turning northwest towards Santa Clara, site of the key December 1958 attack Batista’s army by Che Guevera and his small band of soldiers, and home the Che Mausoleum.

This was definitely the most hilly day, leaving the coastal plain of Trinidad and heading through the Valley de Los Ingenios (valley of the sugar mills).  The ride offered beautiful views of the changing countryside, leaving the Escambray Mtns to the south and heading into the farmlands and foothills of Sanctus Spiritus province, with sugar plants giving way to banana trees, coffee plants, and tobacco farms. 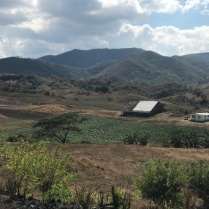 One of the highlights of the biking has been the opportunity to pass through the many tiny towns that make up the countryside, and see the homes, farms, schools, and people in their daily lives.  We caught a group of children on their way to a rehearsal of their play to commemorate the upcoming birthday celebration of their national hero, Jose Marti (that’s Fidel in the fatigues, of course, standing next to Jose!).

And speaking of heroes… we finished the day in Santa Clara, site of the pivotal December 1958 attack on Batista’s army led by Che Guevera and his small band of soldiers, and home of the Che Mausoleum.  The first stop was at the monument to the attack on “Tren Blindado” (armored train), when Che and a small group of guerillas disrupted the train by destroying  a section of track and leaving the bulldozer in the path of the oncoming train (finished off by Molotov cocktails thrown into the train cars to dislodge Batista’s men).   The route prompted Batista’s exile from the country, and the revolution was declared a victory by Fidel shortly after, making it an event much celebrated by Cubans. 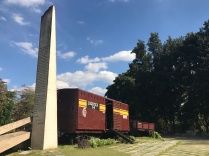 The mausoleum with Che’s remains is nearby , commemorating his death in the Bolivian jungle several years later (this one mercifully downplayed the pretty widely recognized fact of the CIA’s involvement).  The structure and memorial are another powerful reminder of the Cuban people’s pride in their revolutionary heroes, and in the victory they continue to celebrate (“To victory always!”). 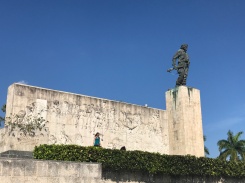 One thought on “Biking Day 5 – Trinidad to Santa Clara”